It is two days left to the Supreme drop. So far only four items have been revealed and NONE of them have gotten more then 50% thumbs up, actually they have all less then 37% thumbs up. THAT IS BAD.

Below you can see a picture of the Supreme x Timberland. It is available in two colorways. Either in all black or in blue, red and brown. The pattern on the shoe is to represent the flag of the US. As seen in the picture one pair’s colorway match with the colors on the flag. The boots are waterproof which is good for the people living in the northern hemisphere where winter is just around the corner. For people living in southern part of the hemisphere you can still buy them and then you don’t have to worry about last-minute-shopping which is extra painful when it is winter season and you are wearing a winter jacket inside a shopping center that keeps playing the same tracks over and over. Back to the shoes, there are only two logos I believe, one red flap with the SUPREME text in white and then a Timberland logo hanging from the laces. 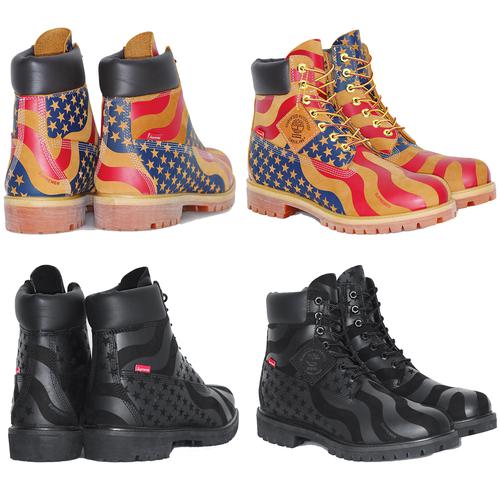 The next item on the list is the Supreme x Vanson leather bones jacket. It is available in three colorways, black and white, red and white and lastly blue and yellow. They all feature a skeleton body in their secondary color (white, white and yellow). There are two pockets with zip closure on both sides of the stomach. There are also two inner pockets. The jacket is made out of  cowhide. It has a total of SIX logos. One Vanson and one Supreme logo on the front arms. Then there is also SUPREME written in the jacket’s secondary color. There is also SUPREME written inside the jacket at the zip closure which will be hard to notice though.

The third item on the list is the Supreme x Vanson leather X-Ray gloves. They are also available in the same colors as the jacket. The gloves are very basic with no logos nor text and has only the application of a skeleton’s hand. The bones are in the secondary color. Why would someone want this? I guess you have to buy the whole kit then.

The last item on this very short list is the Supreme x Vanson leather bones pants. The same colors are available here and as probably guessed the application is a skeleton’s legs, in the garments’ secondary color. Different from the gloves, there are logos and texts here. One Vanson logo can be found on each leg at the pockets and a SUPREME text is written upright along the bones on both legd. The pants have front and back pockets and all of them have zip closure.

That was all, I am a little bit disappointed on this drop. I guess that if you want to buy any Supreme x Vanson garment you have to buy them in the same color and size which could not just be expensive, but also very hard to get and I just think it isn’t worth it. Crappy drop according to me. The average rating of the drop is  4.5, very low I believe.

Let me know if you were planning on buying something and tell me what in the comments!