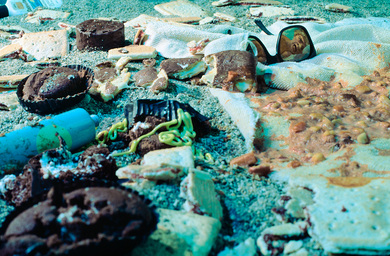 Week 12 of the Supreme fall/winter collaboration has just come out and it is with the American artist born in Glen Ridge, New Jersey Cindy Sherman. Cindy is known for her composed self-portraits as invented characters. The Supreme x Cindy Sherman collaboration will only contain TWO limited edition skateboard decks. Therefore there will hopefully be a little bit more Supreme accessories and garments from Supreme themselves, unlike last week’s drop.

What does the skateboards look like then? Well the first skateboard deck has a very weird picture on the “back”. It is very hard to tell what it really is, but to me it looks like food; sausages, mustard and ketchup. Then there is something in the middle which I cant really find out what it is. On the upper side of the deck there is a Supreme logo and Cindy Sherman’s signature. The second skateboard is the most hyped one and has on the back a picture on a pair of sunglasses that reflects a dark colored skin female. Just like the other skateboard, the upper side has the Supreme logo and Cindy Sherman’s signature. 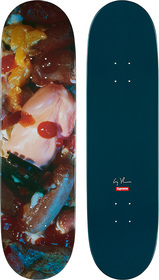 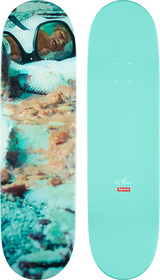 So, is the Supreme x Cindy Sherman a cop or drop? I personally think it is a drop, I mean if it is someone who’s interested on buying one it is most likely a person whom is a BIG skateboard fan. But if you aren’t that huge fan of skateboards and more clothes I suggest that you save your money for other upcoming drops, example the Supreme x The North Face part 2.  I personally am not going to cop any collaboration items this week, but if Supreme releases some of their own clothes and accessories I might buy something.